After months of dealing with architects and city planners and contractors, it’s easy to sometimes forget the reason we started Shep’s Place.  Today, I received a reminder. 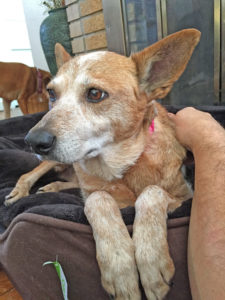 This is Jayne.  She is a 16-year-old Red Heeler that we are fostering for Always & Furever Animal Sanctuary.  She spent her life as a working dog on a farm in Kansas.  When she got too old to perform her duties, the farmer took her to a shelter to be euthanized.

I don’t know how someone could do that to a sweet, old dog who literally served him her entire life.  To just throw her away, like she was garbage.  It’s grotesque.  Fortunately, A&F rescued her in time.

So now Jayne lives with us and our four dogs.  She is an affectionate, mellow old gal.  She loves being petted and having her butt scratched.  Her back legs are weak, so she can’t jump up on the furniture or climb steps, but she enjoys going on walks with the other dogs, and gets around the house just fine.

When Jayne arrived, she became fascinated with the “fetch” game we played with our dachshund, Malcolm.  Malcolm likes to fetch and retrieve plastic balls; he can go for an hour if you let him.  Jayne began trying to fetch the ball, too, but she wasn’t as fast as Malcolm, so she just stole it from him afterwards, and took it to her bed to chew.

Today, though, Malcolm was in another room when Jayne brought the ball to me.  I threw it, and she tottered after, picked it up carefully, and brought it back.  I threw it again, and we ended up playing fetch for a half dozen throws until Malcolm returned.  It was slow and ungraceful, but Jayne was clearly enjoying herself.

That experience really touched me.  Here was this 16-year-old dog, literally left for dead by her supposed family because she was old and useless, happily trotting after the ball like a puppy, because… she just wanted to play.  Jayne still enjoys her life, and dammit, she deserves to go on living it as fully as possible for as long as she can.  I want Shep’s Place to provide the same opportunity for other deserving old pups, like Jayne.  It is right, and it is beautiful, and it will make all the hassle with the renovations worthwhile.