It’s been exactly two months since the last renovation update.  It’s not that we haven’t been working on it; in fact, it’s been the main focus of activity this summer.  It’s just that the plans have been constantly evolving, and I thought we should wait until they crystallized.  Well, crystallization complete!  We’re finally confident that we know what we’re doing, and who is going to do it.  There are still details to work out, but the overall plan is pretty much in place.  So here’s what we have in mind.

We entered the summer with five main questions about the renovations:

To tackle the first three questions, we needed the advice of people experienced with animal care facilities.  In late May, Gina Carnahan, one of our Board members, invited a number of architectural firms with animal experience to visit Shep’s Place.  One of the firms was Tevis Architects, from Shawnee KS.  Though their experience has been with larger, commercial facilities, Terry Tevis was kind enough to visit in early June, and after coming to understand our mission, offered to oversee the renovations.  To my pleasant surprise, he did not push for an addition, but said we should start small and affordable by renovating the existing building.

The very next day, I met with Christine Mohr, the regional inspector for the Missouri Dept. of Agriculture, Animal Health Division.  All animal shelters must be inspected and licensed by the state, so we had to make sure any plans will pass muster with them.  The state regulations are intimidating to read, and I had a good deal of anxiety about the licensing process.  Christine laid those concerns to rest.  I discovered that the state is not a heavy-handed, nit-picking enforcer.  Rather, they are highly supportive of shelters, and realistic about the financial constraints they face.  For every issue, she had an inexpensive solution.  We now feel confident that we can pass the state inspection when the time comes.

Perhaps the most important thing I learned from Christine was that I had been using the wrong set of guidelines to plan the renovation.  In calculating kennel space, I had been following the rules for breeders, not shelters.  Breeders have to provide about 3 times as much space per dog as shelters.  For that reason, I thought we needed a BIG kennel, larger than could fit in the existing house, so that we had to add on a new building.  Once Christine pointed me to the right section, I realized that all our kennels could fit comfortably in the existing garage, as we originally hoped.  So, no addition necessary!  That drastically cut the time and expense required.

The next concern was getting the required licenses and approvals from the city.  I’d tried to read the city code, and it was horribly confusing.  Fortunately, I was able to meet with the Independence Community Development Dept. at City Hall.  I found them to also be very supportive and helpful, and they allayed my fears about local ordinances.  It will still take some effort, but I feel we have a handle on what we have to do, and it should go well.

Just last week I met with the architects again.  Terry Tevis brought on another architect, Suzanne Ivan, to oversee the project.  Using what I learned from the city and state, we mapped out the plans for the renovation.  Here they are.

The house itself doesn’t need a lot of work.  The floors, which are currently bare concrete, will need to be sealed, and then we will install linoleum sheet flooring.  Put some rubber molding along the bottom of the wall, and you should have an easy-to-clean, water resistant floor.  If we want to repaint the brown walls, we can, but that’s optional.

We will install central AC.  We’ll probably add Dutch doors (half and half) to all the rooms.  Other than adding some shelving units for storage, that’s about all we need to make the inside usable.

The biggest job will be remodeling the garage into a kennel room, where the dogs will sleep at night.  (They will spend the day inside the house or in the play yards.)  The garage currently has bare stone walls, and is open to the roof.  It is poorly lit, unventilated, and unheated.  We will add drywall around the outside, and put in a drop ceiling with lights and ventilation.  The kennel will have a separate heat pump for HVAC.  We will replace the garage door with a wall and a regular door.

The kennels themselves will be built by a professional company.  The plan is to have 7 kennels, each big enough to hold two compatible dogs.  There are a variety of kennel sizes, from small to extra-large.  The general design will look like this: 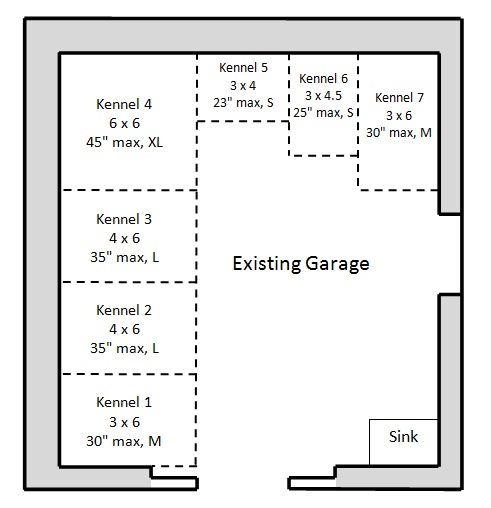 The Kennel Room will have 7 kennels, each of which can potentially hold 2 dogs.  The state also allows you to keep one dog per room indoors unsupervised overnight, if you want.  So, with 7 rooms, we could keep 7 more dogs inside, maybe in crates.  So, our maximum capacity would be 21 dogs.

That being said, we will start with far fewer than that.  We will start small, with a handful of dogs, and make sure that our procedures and finances are adequate.  After that, we will add dogs if and when our resources allow.

The city requires us to have 3 regular, paved parking spots, as well as 1 handicapped-accessible spot.  We plan to put the handicapped spot right in front of the house, and the other three to the left of the driveway.  The space is tight, but they should fit.  If necessary, extra cars can park down at west end of the lot.

We will fence in two play yards west of the house.  When dogs go from the house to the play yard, we want them to be fenced in the whole way, so they can’t run out into Truman Rd.  So, we will add a fence to block off the garage and kitchen door; dogs can travel from either door to the play yards without escaping.  Human traffic will go through the front door.

The play yards will have chain link fences, and grass surfaces, at least to start.  If we can afford it, we’d like to put a wooden privacy fence along the side toward Truman Rd.  The layout would look something like this:

So, how long is this going to take?  You never know exactly, and everyone says it takes longer than you expect.  But according to the architects, this is a reasonable timeline:

September:  Get permits, line up sub-contractors

So, if all goes well — of course there’s no guarantee it will — we should be ready to open around the first of December.  I would like to point out that December 1 is still technically Fall, so our signs that say “Opening Fall 2018” would still be accurate.

What Can You Do?

The answer is probably not a mystery.  Turns out architects and contractors and fences and air conditioners cost money.  So if a home for abandoned older dogs is something you believe in, we’ll be passing around the electronic plate over the next few months, asking for your support.  Thanks to those who have already donated; it has kept us going so far.  Please consider helping us again as we turn the dream into (literally) concrete reality!