Now that summer has begun, and I no longer have to mold young minds at school, I can finally turn my full attention to Shep’s Place.  It may not look any different when you drive by, but behind the scenes, things are bubbling.  Here’s an update.

We were told (by people who know such things) that remodeling the garage into a kennel would be costly, and the resulting space too small.  So now our plan is to build a new kennel building next to the garage.  I’ve spent way too many hours playing around with floor plans; here’s the latest version.  It is 44′ x 32′, and has 9 kennels, which can house from 9-18 dogs. 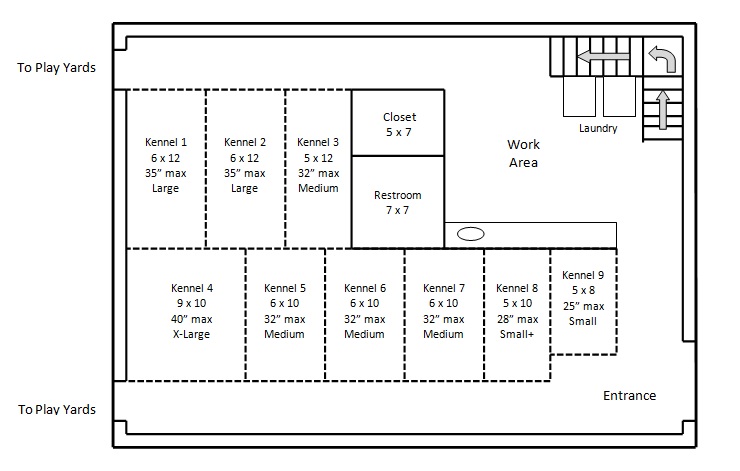 This is just a sketch, and I’m no architect, so I’ve probably overlooked something vital, but you get the idea.  I’ve sent this design to Butler Buildings and Morton Buildings, and asked for a price estimate.  We’re also going to have some regional architects take a look.

In addition to the kennel building, we’ll need to add play yards and parking.  I bought a measuring wheel, measured the heck out of the property, then spent even more hours tinkering with site plans.  I’m sure this will continue to evolve, but here’s the basic layout: 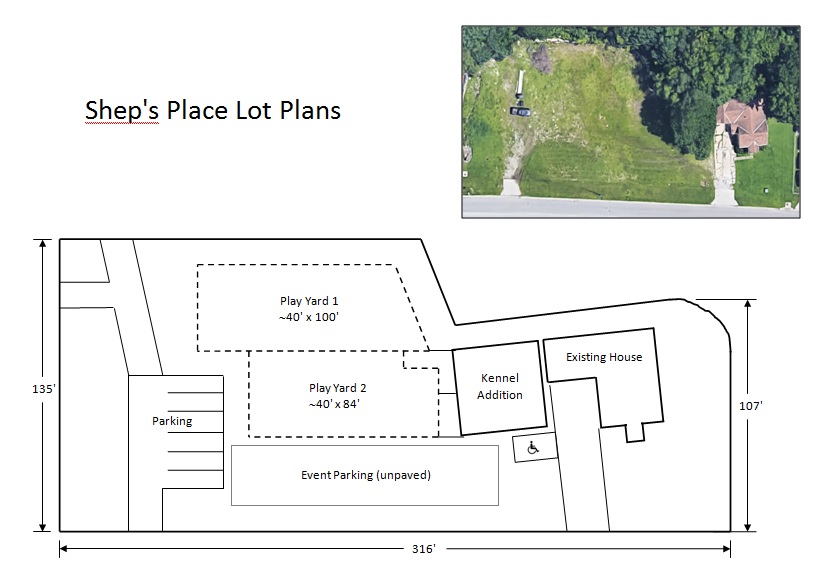 3.  City of Independence, a.k.a. Sheppyville

To start a (non-profit) business, there are a boatload of city ordinances and permits to take care of.  I started looking through it, and began to panic, because… it’s crazy!!  Then I discovered this wonderful place called the Community Development Office.  If you are starting a business in Independence, they will organize a meeting with representatives from all relevant city departments, who will then walk you through everything you need.  How awesome is that?  Probably every city has one, and I’m just ignorant, but I was very relieved to discover them.  Anyway, they are coming to Shep’s Place on June 21 to help us figure out what permits, etc., we need to open.

I also have a meeting next week with the head of Independence Animal Control, Jennifer Polston.  She will visit Shep’s Place, and answer a zillion questions about how to obtain an animal shelter license from the city and state.

Our Volunteer work groups have merged into a single Planning Group, which meets every Wednesday from 6:00 – 7:30.  We had eight people at the meeting Monday, which was great.  This update is basically a report on that meeting.

The Planning Group will meet next month with a local veterinary group, who will hopefully become our primary vet care providers.

We have official colors!  We were talking about T-shirts, and decided we need a consistent color scheme for apparel, flyers, and so on.  I happened to be wearing my Senior Dog Sanctuary of Maryland shirt, and people liked how the lettering stood out against the background.  So, our colors are (Kansas City) Royal Blue, and Bright Yellow.  Thanks, SDS, and I hope you don’t mind us copying!

We have created application forms for Fosters and Adoptions.  We will eventually post them on the website.

We recently added three new members to the Board of Directors:  Angie Bloss, Gina Carnahan, and Amy Caviness.  With Ann and myself, we now have five Board members.

We’ve ordered printed flyers to hand out at public events.  We plan to attend the Blue Springs Fall Fun Festival in September, and Dogtoberfest in October.  We are looking into a bunch of other events and fundraisers, as well.

Gina Carnahan snagged us a computer that her office was getting rid of!

There’s more, but that’s enough for now.  Just wanted to let you know that we are working diligently to make Shep’s Place happen.   Thanks to the Volunteers for all of their efforts.