I returned from SDS with a wealth of information about how to run a Sanctuary.  The underlying purpose of the trip, however, was to answer two basic questions:

The point of all the interviews and observations was to help us make a crucial decision.  Is Shep’s Place a Go or No-Go for us?  Do we really want to do this?

You might think, with some justification, that we should have answered that question before starting a website and printing business cards.  But, you know, that’s how the world works these days; we wanted to gauge whether there was any interest or support for the idea.  And there is, which is encouraging.  But now, we’ve reached the proverbial fork in the road.  To go any further, Ann and I will have to make permanent life changes:  selling our home, buying property, changing career paths.  It’s not something to jump into lightly.  So before we drink the Kool Aid, we want to be sure:  can we do this?  and if so, will we be okay?

Now that we’ve seen what it takes to start and run a Sanctuary like SDS, the first question is, can we do the same thing here, or at least something similar?  The reason I was drawn to SDS was that they put together a top-notch facility and organization in such a short time.  I wanted to figure out how they did it, so we could recreate it here.

I’ll be honest.  After the first night at SDS, having seen their beautiful facility, I was a bit discouraged.  I didn’t see how we could possibly match that anytime soon, if ever.  When Val and his family were at the same fork in the road that we are now, they decided as a family to commit a major portion of their resources to founding the Shelter.  That was a truly admirable decision, a willing sacrifice to create something lasting and meaningful for a cause they believe in.  We would do the same if we could, but that is not an option for us.

As I thought about it the next morning, though, and talked to more people, my outlook began to change.  I could almost feel the pieces shifting in my mind; my mental GPS was stuck on “Recalculating…”.  I realized that our trajectory doesn’t have to match that of SDS.  One of the staff told me that SDS was the “Disney World” of Sanctuaries, a top-flight organization and facility to aspire to, and I agree.  But that doesn’t mean we have to go as far as they have as quickly as they did to be a success.  I had to remind myself that starting a Sanctuary is not about keeping up with the Jones; it’s about helping old dogs.  If we end up with half as many dogs, at a facility half as nice, well, that’s still a wonderful thing well worth pursuing.

So, the conclusion:  Can we build something as nice as SDS as quickly as they did?  Almost certainly not.  But that’s okay!  Our story will be our own.  We will have to proceed more slowly.  A permanent facility is expensive to build and maintain.  If that is our goal, we will have to work to raise money, and that will take time.  Val said donors want to see a track record before they commit funds, which makes total sense.  So we’ll have to start small, establish ourselves, show we have a sustainable plan and organization, before asking for money for a bigger facility.  It may take years.  And there’s no guarantee we’ll ever reach the big facility.  But if not, that’s still okay!  Helping some dogs is infinitely better than helping no dogs, and it is still something to be proud of.

Question 2:  Is our family ready to commit to a Sanctuary?

Ann and I are private people, so it makes me uncomfortable to discuss this publicly .  But starting a Sanctuary would require us to redirect the rest of our lives, and that’s something we had to think long and hard about.  I pretty much had the feasibility question figured out by the end of my trip to SDS.  The personal question has taken us longer.  Okay, to be honest, it’s taken me longer; Ann was fully behind it from the start.

Two things to know about me.  First, I’ve never been money-oriented.  I always wanted to do what I felt good about, and trusted that I’d make do with whatever it paid, which is how I ended up in teaching.  Second, when it comes to major decisions, I’m highly risk-averse.  I don’t want to jump into something, then look back 10 years later and think, you idiot, why didn’t you think that through?  I have to gather a lot of information, sift through it, lay out best and worst-case scenarios, and hem and haw until I convince myself that I’m not doing something amazingly stupid.  That’s what this delay has been about.

Two days ago, we finally put it all together in a way my brain could process.  Ann and I made a list of the pros and cons of starting a Sanctuary, and ranked the importance of each.  We realized that the items that leaned toward “Go” were all related to Career, Purpose, and Service, while the items that leaned toward “No-Go” were related to Security and Comfort.  So the choice really came down to this:  Do we do something we believe in, or give that up for the sake of security?

Once upon a time, I would have scoffed at that choice.  I’d have said choosing Security over Purpose was weak, that it meant you had no convictions, and it would make you less of a human being.  But I’m in my 50’s now.  Being old and penniless is not some far off hypothetical concern, and if I screw things up now, I don’t have decades to correct it.  So Security does matter.

But, still.  Doing something we believe in, building something that could last, helping vulnerable, old dogs…  Could we really turn our backs on that because we wanted to play it safe?  That would be surrendering to Fear, and we don’t want Fear to be the deciding factor in how we live our lives.  If we did, we would be lesser human beings.  Will it cause stress and uncertainty?  Absolutely.  Will we survive?  I’m sure we will.

Soooooo……  LET’S DO IT!!!!   We’ve made our decision.  We’re in!  We hope you’re in, too!  The time for contemplation is over.  We’re ready to start taking concrete steps toward making it happen.  Who knows how it will end?  But at least we’ll find out together! 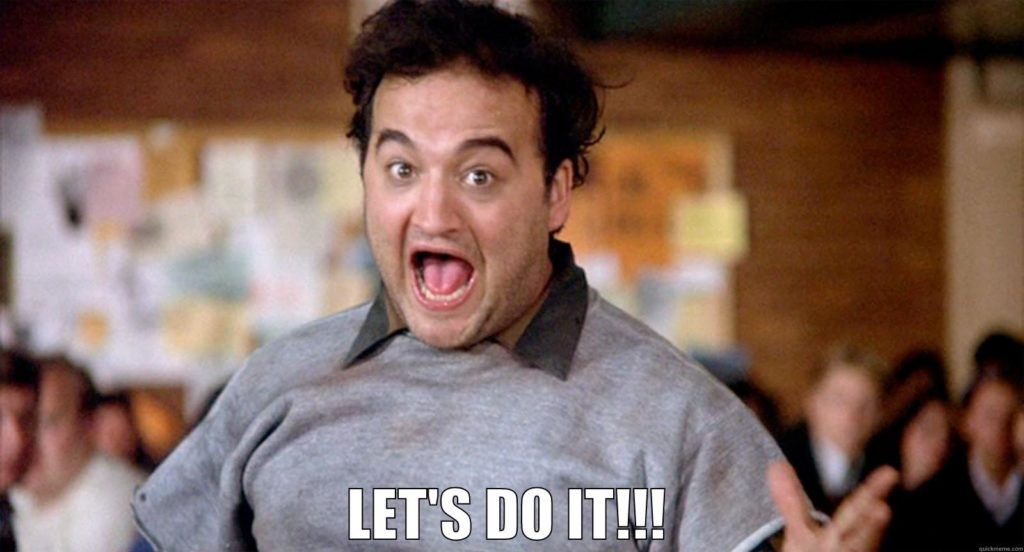