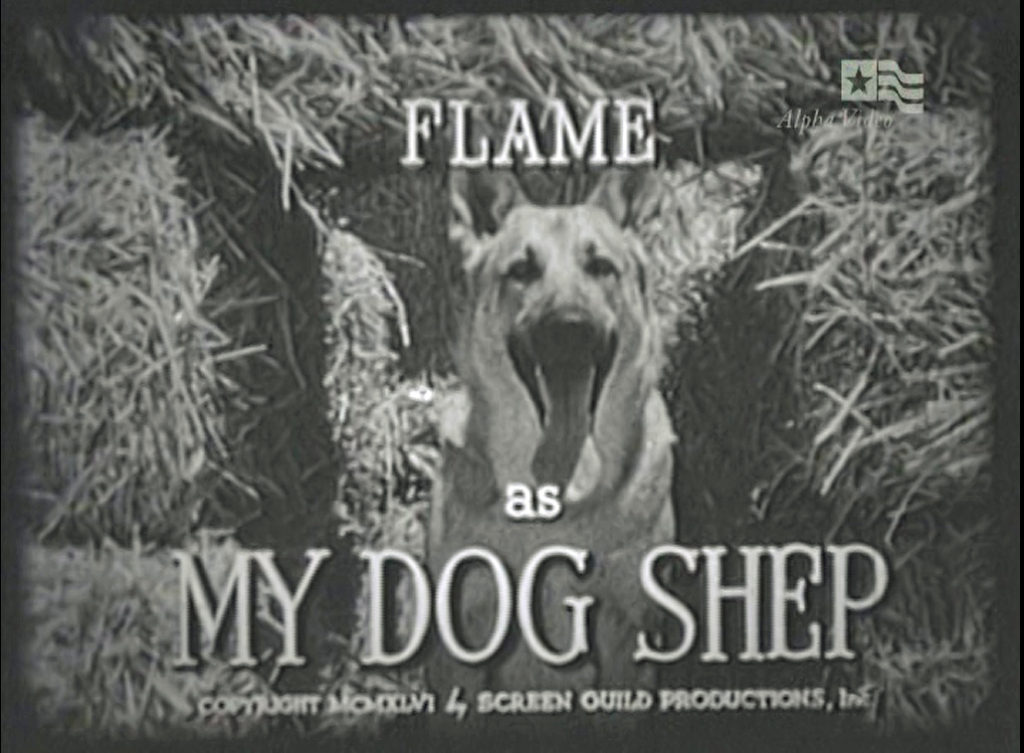 For years, the name “Shep” has been synonymous with “faithful dog.”  So when Hollywood writer/director Ford Beebe — best known for “African Treasure” (1952) and “Flash Gordon Conquers the Universe” (1940) — wrote a screenplay in 1946 about a boy and his faithful dog running away, he of course named it “My Dog Shep.”  And because I care so much about sharing Shep History with you, I actually purchased and watched the DVD of “My Dog Shep”.  (Ann refused.)  Here is my movie review!

The movie opens with a boy, Danny Barker (…”barker”, get it?) about to arrive at his distant relatives’ house in the country.  Danny was raised in the city, and his parents were recently killed in a car crash.  On the way to the Hodgkins’ farmhouse, Danny picks up a stray dog, Shep.  They soon discover that neither of them are wanted by the farm family.  When his uncle suspects Shep of killing a chicken (he didn’t), he tries to shoot Shep.  That night, Shep and Danny run away, much to the satisfaction of his uncle.  On the road, they take up with Carter Latham, an older gentleman who had just left his son’s home after discovering that he, too, was unwanted there.  The three strike up a friendship, and begin living off the land, hobo-style.

As often happens in movies, we soon discover that Danny has inherited a small fortune from his parents.  His skinflint uncle is suddenly interested in finding and adopting him, and offers a reward for his return.  Several shady characters begin searching for Danny.

While swimming in a pond, Danny meets a girl his age, Lorna, whose father is the District Attorney.  Other shady characters kidnap Lorna to blackmail the DA, and when Danny defends her, they take him as well.  Shep, however, tracks their scent, and finds the children hidden in a barn.  Shep fights off the bad guys until the police arrive.

In the end, Danny is adopted by Lorna’s family, and they invite Mr. Latham and Shep to come along as well.  The End!

So what did I think of the film?  Well, it was clearly a movie from the 1940’s.  The acting and dialogue are a bit clunky, and the characters somewhat two-dimensional.  Here is an actual line of Danny’s dialogue:  “Gee, that would be swell, wouldn’t it old boy?”  (Shep’s reply:  “Bark!)  But that’s how they used to make them.  I expected it to be unwatchable, but it wasn’t.  Instead, it told a nice story, about unwanted people (and dogs) finding meaning and purpose with each other; a bit heavy-handed at times, but genuine.  IMDb gives it 6.2 out of 10 stars, and that sounds about right.  Plus, a dog named Shep is the loyal, courageous hero, and that’s the mark of a quality film, isn’t it old boy?  (Bark!)  I give it 3 paws out of 5.

The film was successful enough that Beebe wrote a sequel of sorts, “Shep Comes Home”, in 1948.  It also starred Flame, but was set in Texas with a different set of characters.  It was billed as a “THRILLING ADVENTURE OF A BOY AND HIS DOG…in a heart-warming drama the whole family will enjoy!”

My favorite thing about the movie, though, is that I found an original theater poster for sale on eBay!  I plan to hang it in the Sanctuary some day.  Here is our Shep, ignoring the poster for “My Dog Shep.”