So why name a dog Sanctuary “Shep’s Place?” Sounds like a bar, right? Well, Shep is the name of our dog, whose picture graces the top of this page. We don’t know exactly how old he is, because he was a stray picked up by the police in Buckner, MO, and transferred to Great Plains SPCA in Independence. We don’t know his original name, either, or his first owners, what he looked like as a puppy, or how he came to be homeless. He’s a dog of mystery…

The shelter named him “Goulash,” and estimated that he was 8 years old. He spent several months there before I saw his picture online, read his bio, and came to meet him (Ann was out of town). In fact, the cover photo above was taken at Great Plains the day I met Shep. I like It, because it symbolizes to me that old dogs like Shep can still have a new start.*

Since Goulash was a temporary name, and we didn’t know his original name, we felt free to rename him “Shep.”

Now, you may have noticed from the picture that Shep is not in fact a shepherd dog; he is a beagle/basset mix. So why “Shep”? For the perfectly sound reason that, he, like our other dogs, is named after a character on the short-lived TV show “Firefly.” Duh! Shep is short for Shepherd Book, a wandering clergyman who takes up with the crew. As the only grey-haired character, and a quiet, peaceful man, his name seemed a good fit for Shep.

When we started thinking about a Dog Sanctuary, I first wanted to name it “Happy Dog Acres.” Ann thought that was dumb, and she was right. So, instead, we decided to name it Shep’s Place, in honor of the dog who showed us that old dogs are worth loving and protecting.

In doing research for the Sanctuary, however, I discovered that there is a long line of famous dogs named Shep stretching back over the years. For whatever reason, these Sheps have stories that exemplify the undying loyalty of dogs, so much so that “Shep” has become synonymous with “old, faithful dog.” That’s why, for example, Aldi has a brand of dog food named Shep, and Elvis Presley recorded a song called “Old Shep”. 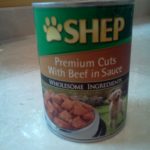 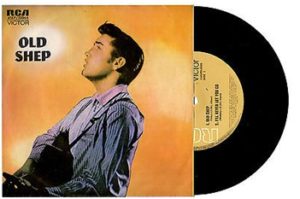 This added context has given an (unintentional) depth of meaning to the name “Shep’s Place.” Besides meaning “the place of our specific, science-fiction-TV-named dog”, it also means “home for old, faithful dogs.” And that is about as cool a description of what we hope to achieve as you could come up with. Serendipity, yay!

So, who are these famous Shep dogs from history, you might theoretically ask but probably haven’t? Funny you should theoretically ask. Over the next few posts, I’m going to share some of their stories, in the epic series, “Famous Sheps in Dog History.” Stay tuned!

*P.S. I have since become a regular volunteer at Great Plains SPCA. Given that a photo on their website led us to Shep, it is fitting that my niche there has become taking pictures of incoming dogs, to make them look their best so they connect with a family, too. You can see some of the pictures at http://www.greatplainsspca.org/adopt/adoptable-dogs-indy/. Look for the ones with an orange leash; those are mostly mine.